CSAs for the week of June 30th 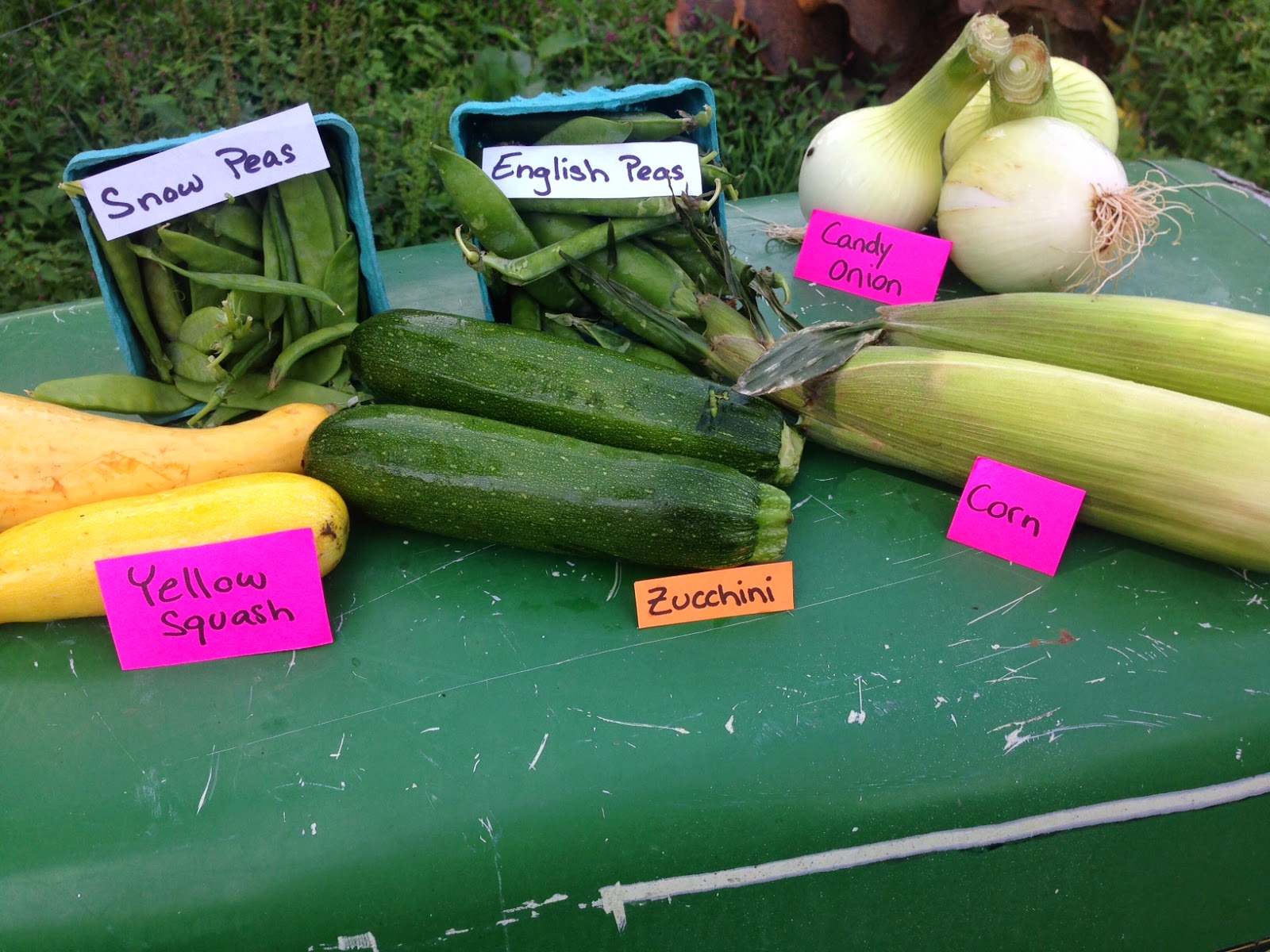 Additional items for the Large shares: 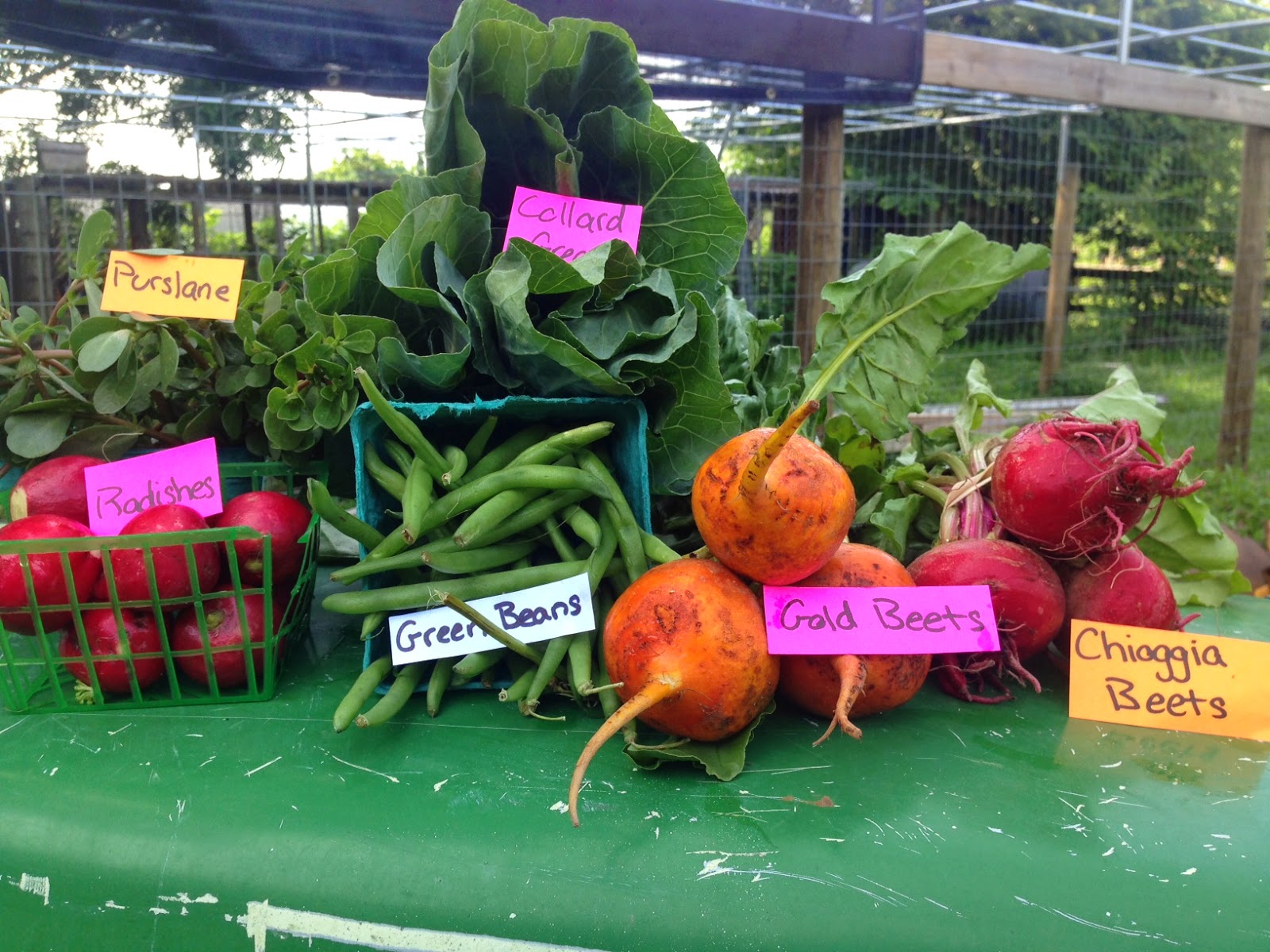 Herbs are:
Fruit shares have: 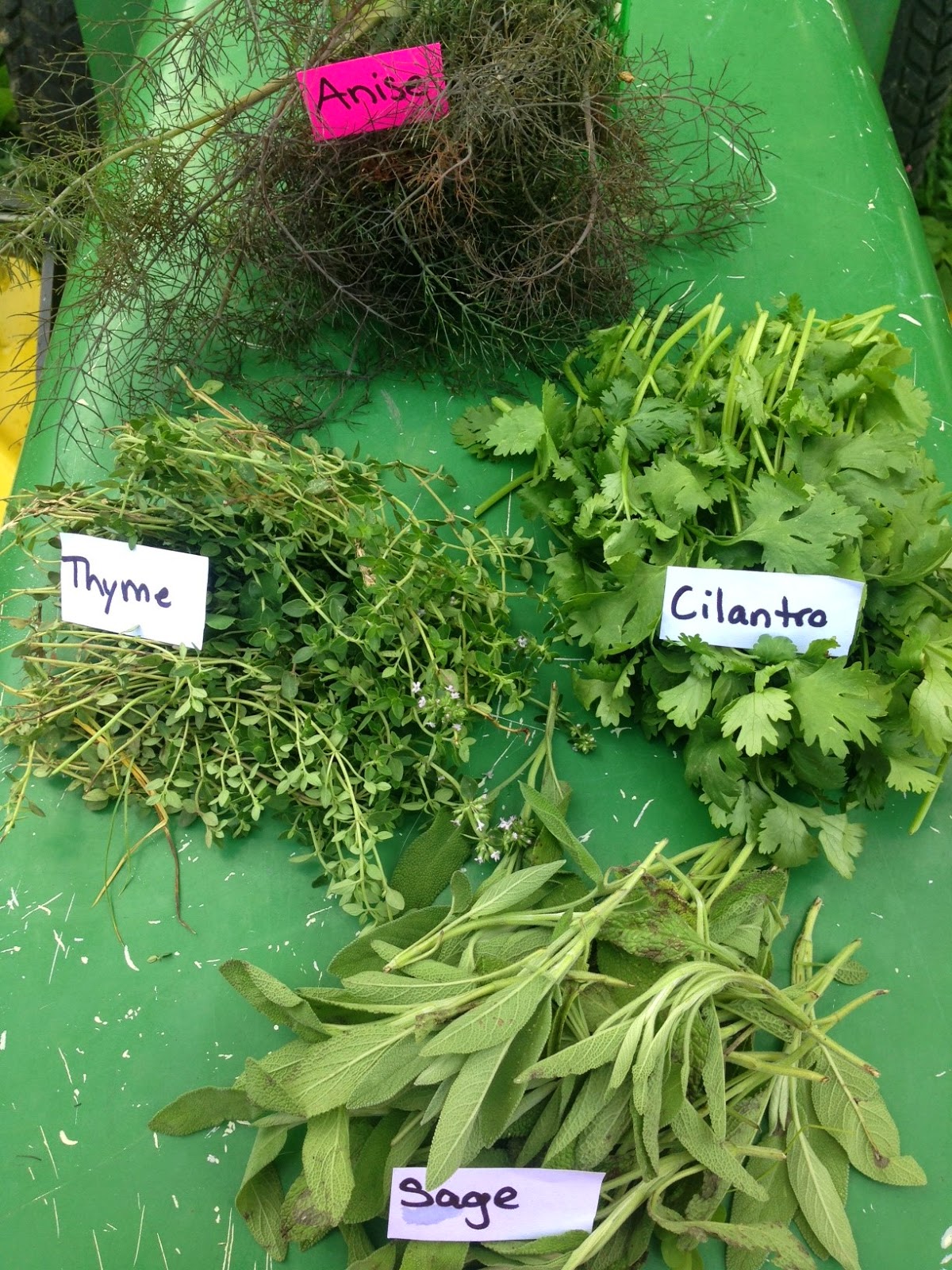 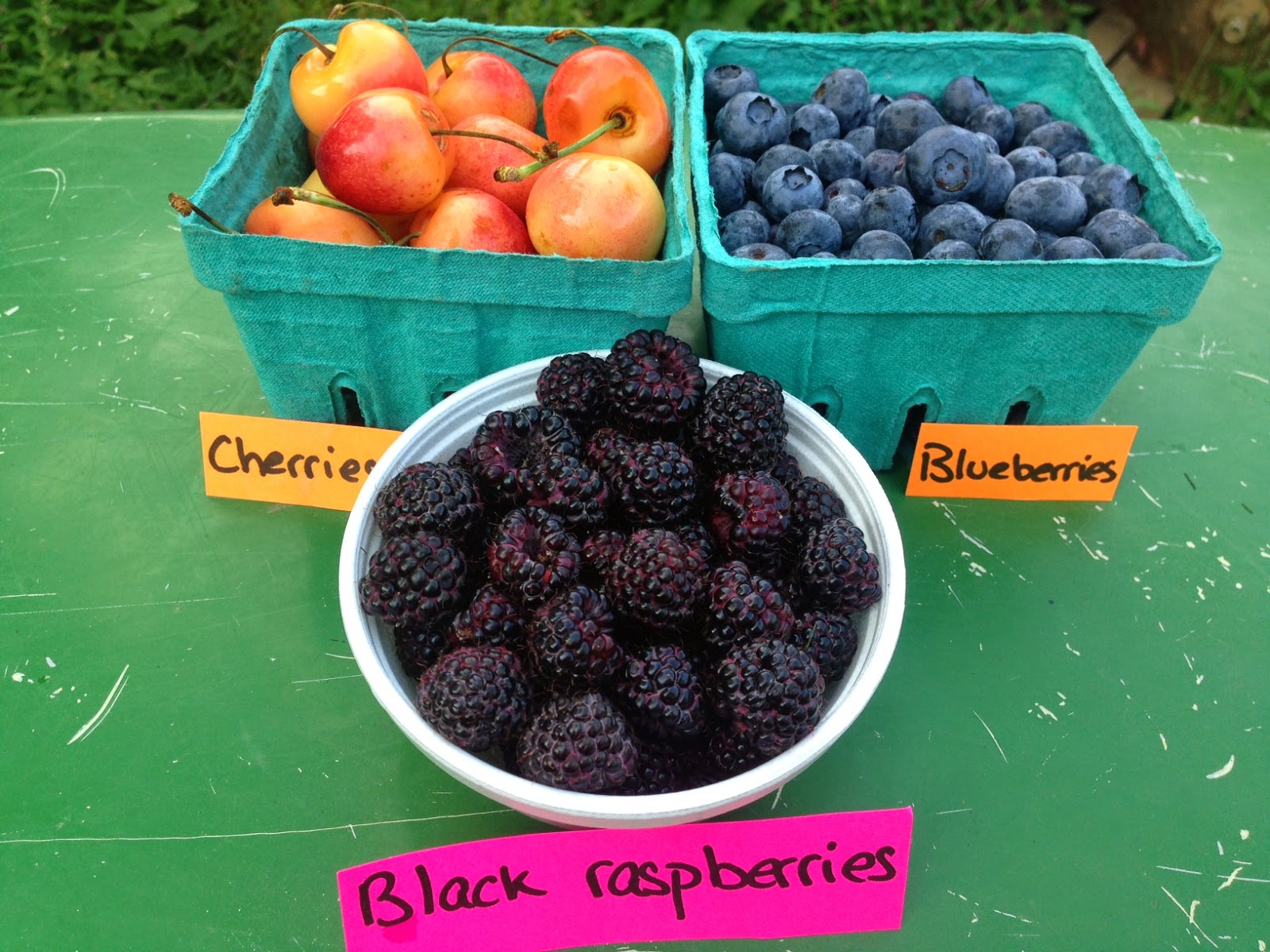 REMINDER: July 4th is this week. Let us know ASAP if you need to change your CSA pick up schedule!! We are open 9-3 on Friday.
Posted by Highland Orchards at 11:24 AM 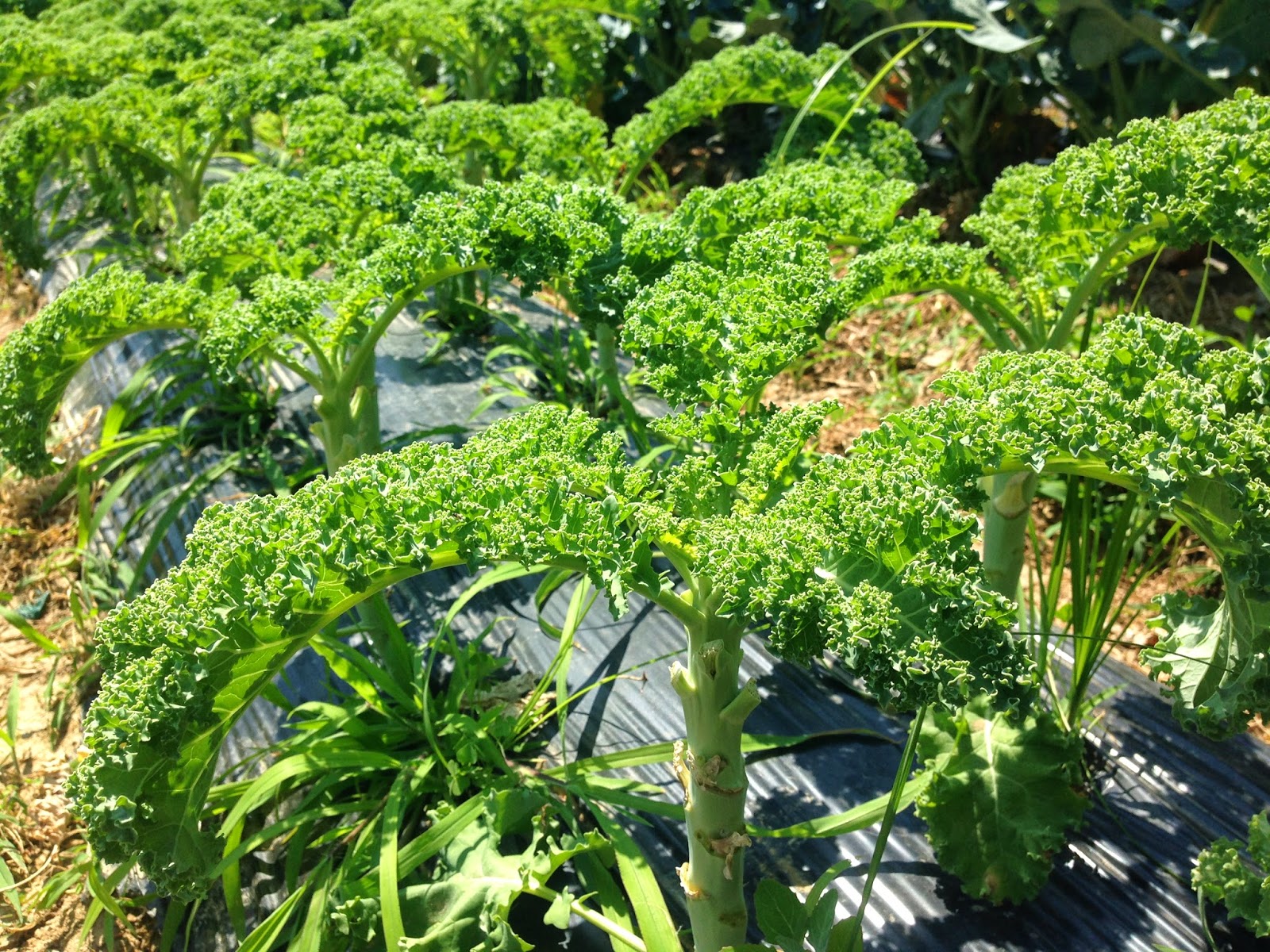 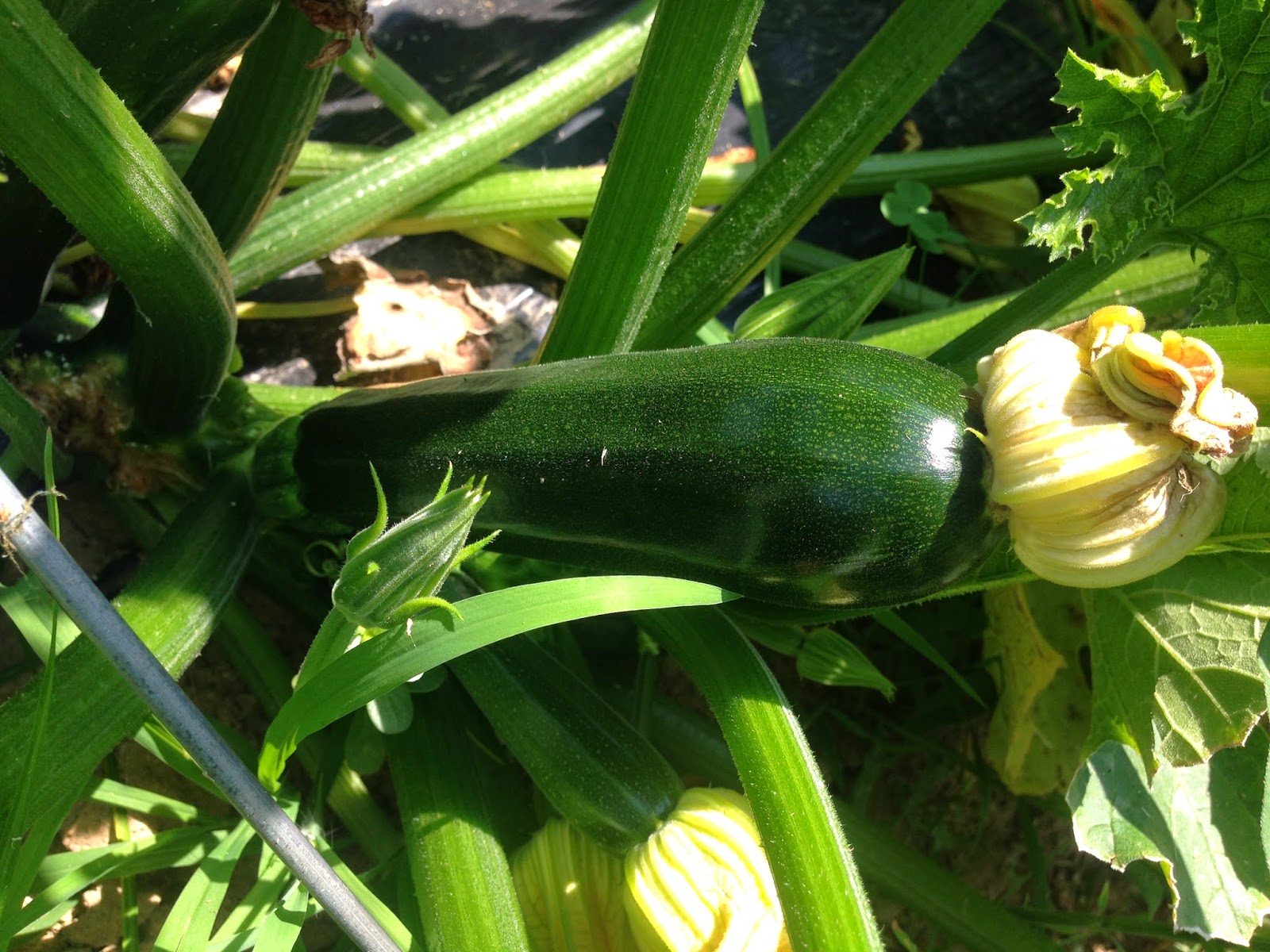 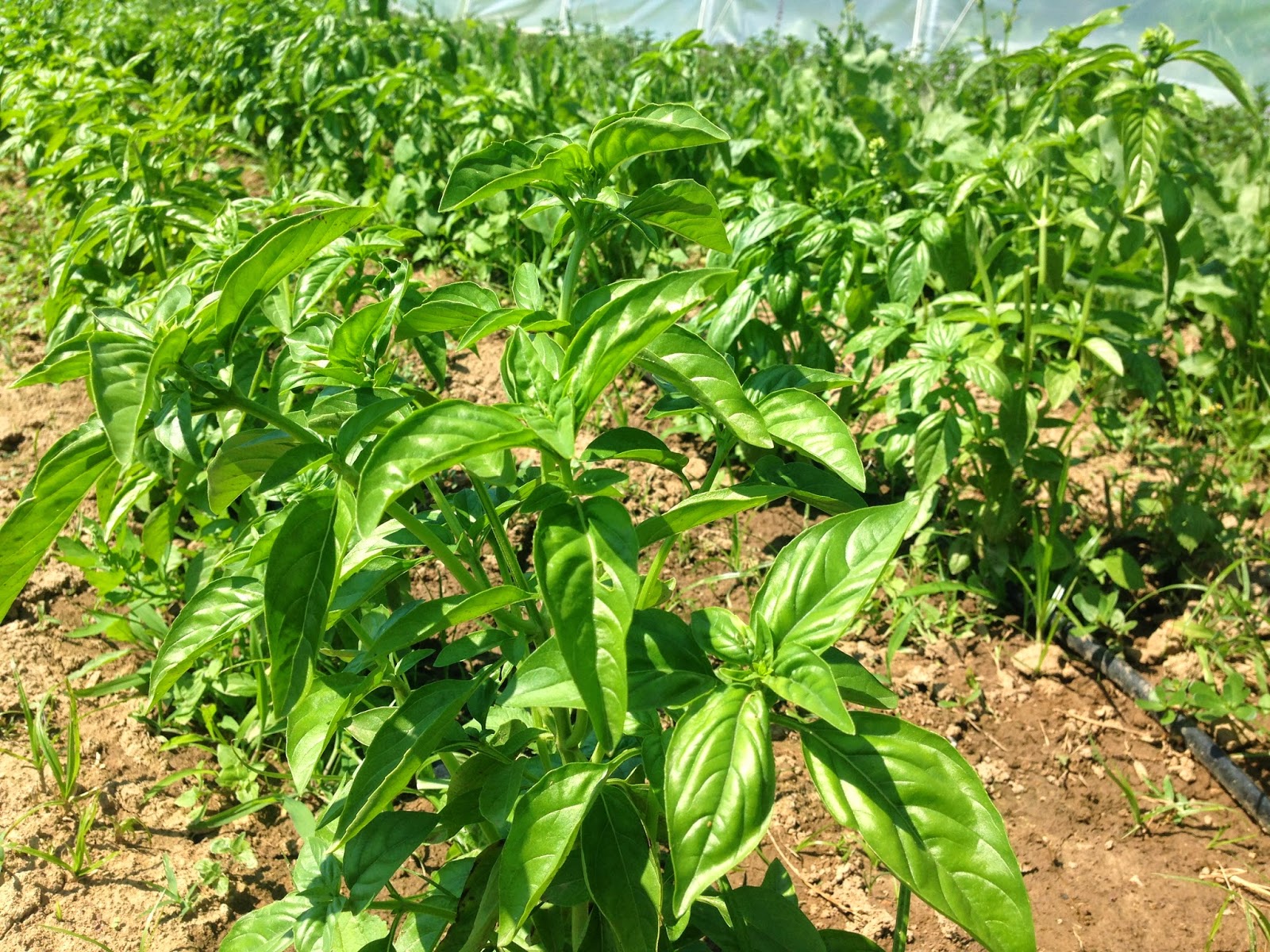 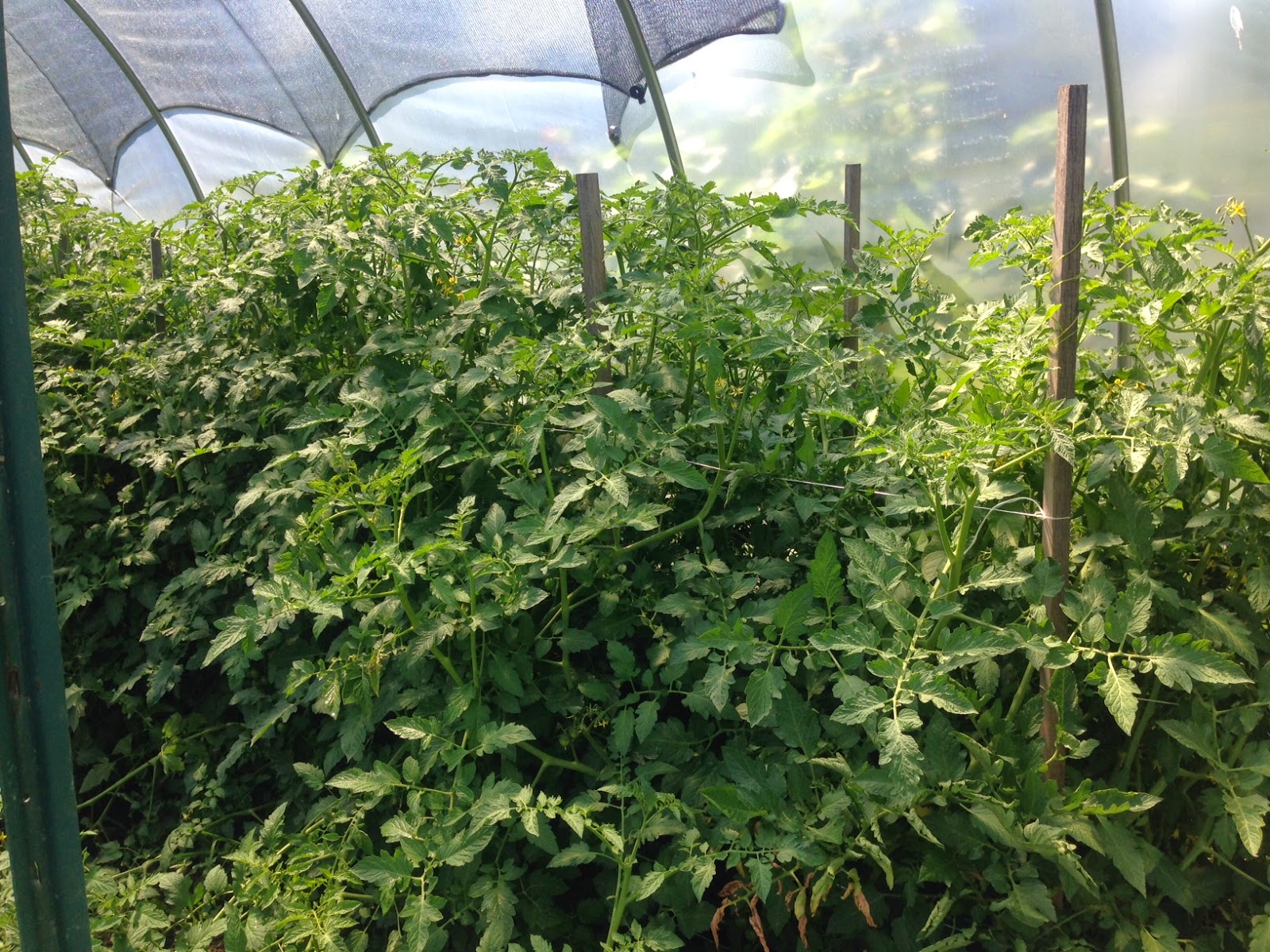 On another note, remember the tomato plants from the previous post - where they look big but are still small enough that I cropped off the top of the wooden stakes? This is them on the right about a week later - they are 5-5.5 feet tall. The black stuff on top of the plastic is a screen we  put on in the summer to help keep the plants hot but not baking.

Posted by Highland Orchards at 4:02 PM

We have several greenhouses throughout the property. Some old, some new, and some not yet finished. Some have fans, some have heat, some have immovable sides, and some have roll-up sides. Each modification is designed to help add just the right aide to the plants. Hope you enjoy seeing some of our growing projects. 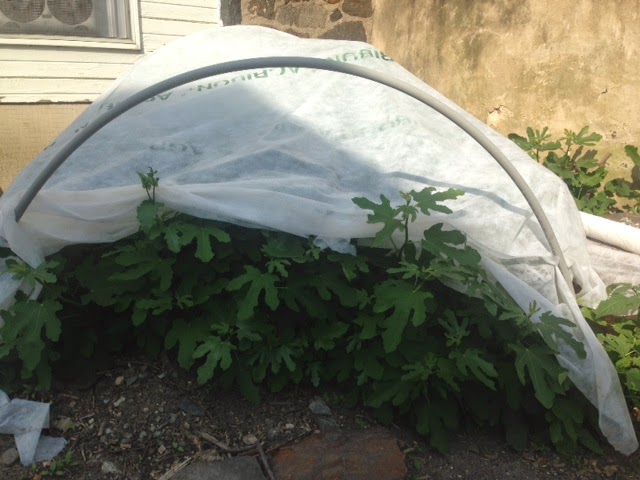 This super cold snowy winter was really hard on many of the plants. Some, like fig trees, died down to the ground. To help encourage growth, we have our figs covered with row cover (the same stuff that brings the strawberries on a week earlier). The fabric lets light, water, air, and heat in. Row covers are less energy efficient than a greenhouse but definitely give the plants a little boost. Unfortunately, the weather damage was so severe that we will probably have a small fig crop this year. 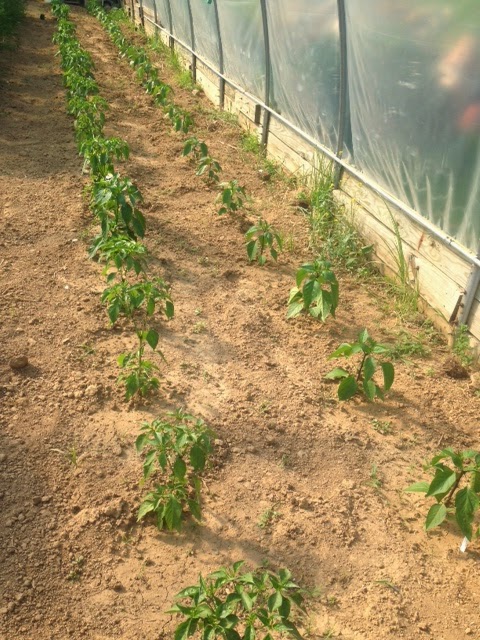 Peppers! Peppers are one of those plants that thrive in the greenhouses in the peak of summer so hopefully these freshly planted guys will be producing out the wazoo in a month or so. Last year we found a ball of garden snakes enjoying themselves with the peppers.

These guys are in one of our older greenhouses. It has a huge fan at one end and a simple roll up door at the other to help with air circulation and keep mold away.

This greenhouse also saved us this winter as it is our only heated greenhouse. It is amazing how well the plants can do when it's kept at 40 degrees versus 30 degrees. 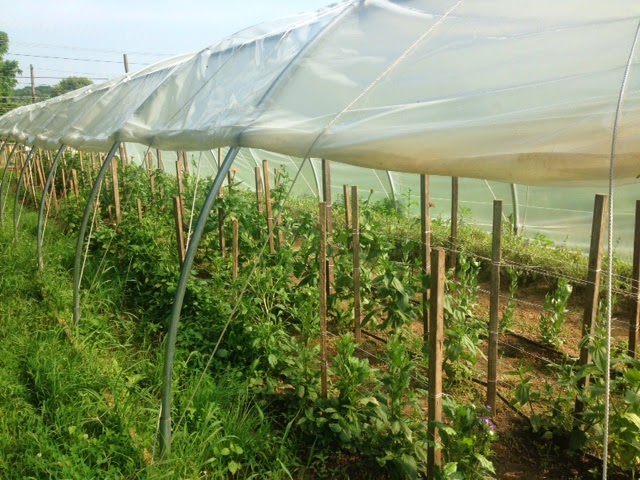 This is a work-in-progress greenhouse. We've stopped work on it for the summer and will just use it as a high tunnel - just a top, no sides - for some of the cutting flowers. 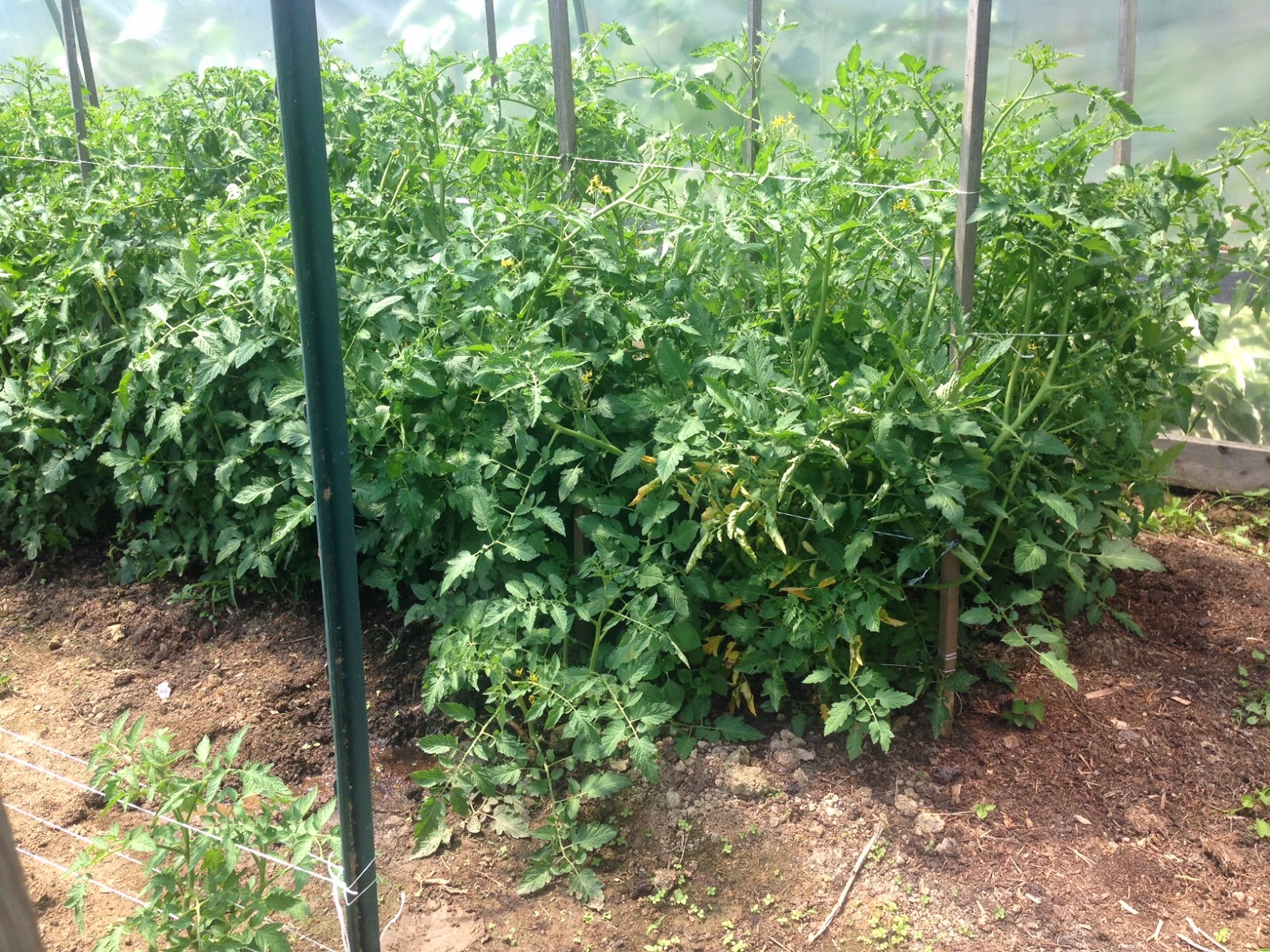 Tomatoes tomatoes tomatoes! We have our striped heirloom varieties here and should be able to start picking from them in 1-2 weeks. The midget plant in the bottom left corner is a start of a row that was planted only two weeks later than the big plants. 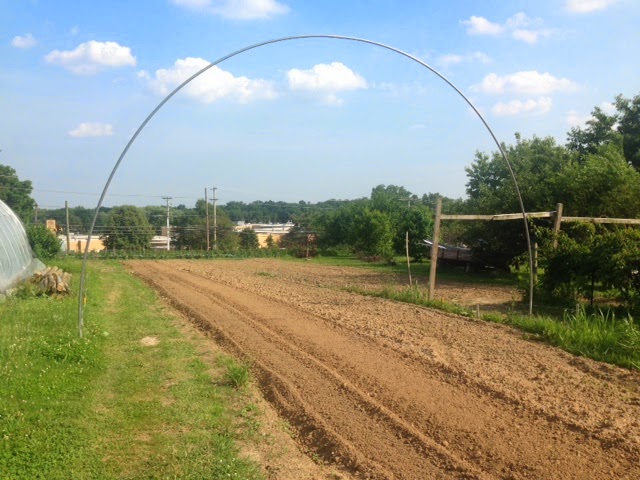 A future greenhouse. This one will extend as far down as the one on the left. We just ripped up our old raspberry patch and will be planting some cutting flowers - and anything else people manage to sneak in - until the new greenhouse is up. 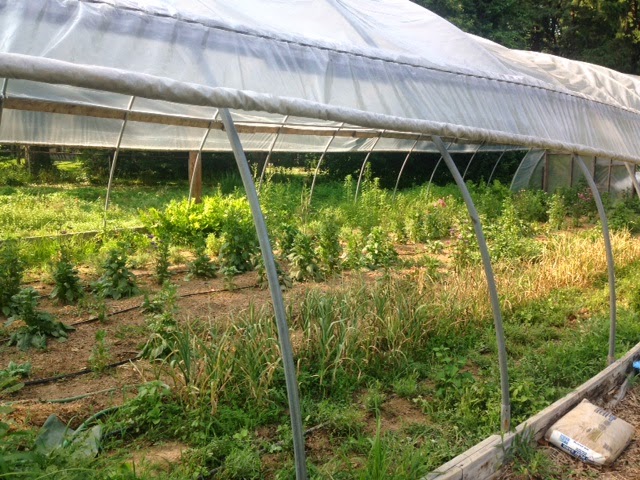 This is our jack-of-all-trades greenhouse. We have flowers, herbs, and veggies (and weeds) in here. This greenhouse actually had to be rebuilt a few years ago because the weight of the snow collapsed it one night :(. When we rebuilt we added the option of roll-up sides (seen in the picture) so the greenhouse doesn't get too hot in the summer.

Posted by Highland Orchards at 9:29 AM

Highland Orchards Farm Market, is a small, family-owned and operated farm in northern Delaware, established 1832. We grow fruits and vegetables without synthetic chemicals or pesticides. We sell our produce through our farm market located on the farm, through our CSA program, and at two farmers’ markets in Philadelphia. Real food, a real farm, for people who really like to eat!